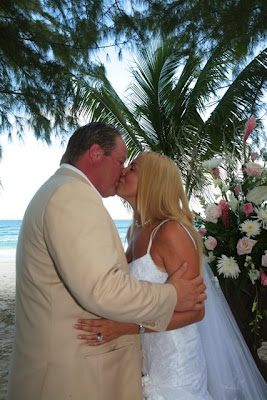 dian bridal designer Danielle Cormier and Mike Doiron tied the knot in a beautiful ceremony in Barbados on July 12, 2008. The couple from Brampton Ontario first met in a chance meeting in a bar while out with friends and it was definitely a case of love at first sight. Mike proposed during a romantic dinner on a surprised trip to Bermuda. “He got down on one knee and told me the five things he loves about me, I always told him throughout our nine years of dating that if or when we were to get married that he better know at least five things he loves about me” Danielle says.

The couple chose the Casaurina Beach Resort in Barbados because of the ease of getting available flights for their guest and also because the resort accommodated children. On the day the bride wore a Daniella Couture gown made and designed by the bride and the bridesmaids also wear custom made gowns from her line. Danielle’s dress was a mermaid gown with spaghetti straps made of silk taffeta. The groom and groomsmen wore bespoke suits by famed tailor Lou Myles know for his custom suits for celebrities like Muhammed Ali. Mike sported a tan linen suit and white shirt while the guys wore light pink long sleeve shirts and tan pants. The unique thing at the ceremony was after the bride’s father walked her half way down the aisle and then her mother walked her and her daughter the rest of the way where her daughter gave her away.

The reception for 60 guests included Caribbean seafood salad, chargrilled angus sirloin steak and tender lobster tail, grilled chicken breast in port wine jus, penne and fusili pasta and the dessert was Florida orange and lemon sorbet. After the wedding the couple spent an extra four days in Barbados and got a chance to explore the many secluded beaches while on a chartered boat cruise.

Congratulations to Danielle and Mike.

One of the Caribbean's top 10 accommodations

Beauty Tips for the Destination Bride

Divi and Tamarijn Aruba are ready for romance

Destination Weddings in the Caribbean After Covid-19

What Should I Do About My Destination Wedding During The Pandemic